Coen has more than 40 years pigeons and started as a 8 year old with a few lost pigeons that were housed in an empty rabbit hutch. When he was staying with his grandmother in his youth in the summer months, he was really infected with the carrier pigeon virus :-). He helped taking care of the pigeons from Lou Kok and also came into contact with his grandmother’s brother, a very fanatic and very good pigeonfancier. This was Sjors Snijder, who at the time with his Wigmans pigeons was a big champion in the region. Soon youngsters came to Coen and his first real pigeon loft was built in the garden. At the age of 12 he joined a pigeon club with his brother. In those beautiful early years, Coen at Munich and Limoges achieved great results, such as 11 in the first 15 at the NIC on Munich in 2006. Another example is the result of a tough Limoges in 2008. On that flight, Coen scored 8/9 and he had them all 9 at home in the evening.

After a total sale of his allround pigeons in 2013, Coen re-started in 2015 in Rutten with a whole new line of pigeons for the long distances (450-1100km). The pigeons were purchased directly from Klaas de Vreeze, Jan Grootoonk, Gebroeders Limburg and the Jelle Jellema pigeons via Vriebelink, Dries Timmerman and Bas Janssen. In 2016 a lot of youngsters were bred and the late youngsters of 2015 were basketted. In 2017 he basketted for all NPO races including some marathon flights. In the fall of 2017, Coen decided to move to Luttelgeest where it is fantastic to keep pigeons. All old pigeons have been taken to Luttelgeest and were put in the racingloft where they were kept and raced on the natural (“nest”) system. On the first two multi-day and long-distance flights in 2018, his pigeons immediately showed that the new loft was allright: Coen won a 4th NPO Limoges (8 National Limoges Sector 4) and 57 NPO at Troyes. Coen also won the 19th and 21st NPO at the National Classic NPO Chateauroux.

In 2019 Coen won 9 times the first prize in his club Zuiderzeevliegers! Coen stood twice on Teletext (9 NPO Orange, 10 NPO Dax) and he was the Grandmaster on National Dax Sector 4!

In 2020 Coen Brugman was the best of all! The best marathon fancier in his region, the department 11 and in the sector 4 National !! He scored a teletekst position on the +1000km marathon flights ALMOST EVERY WEEK ! 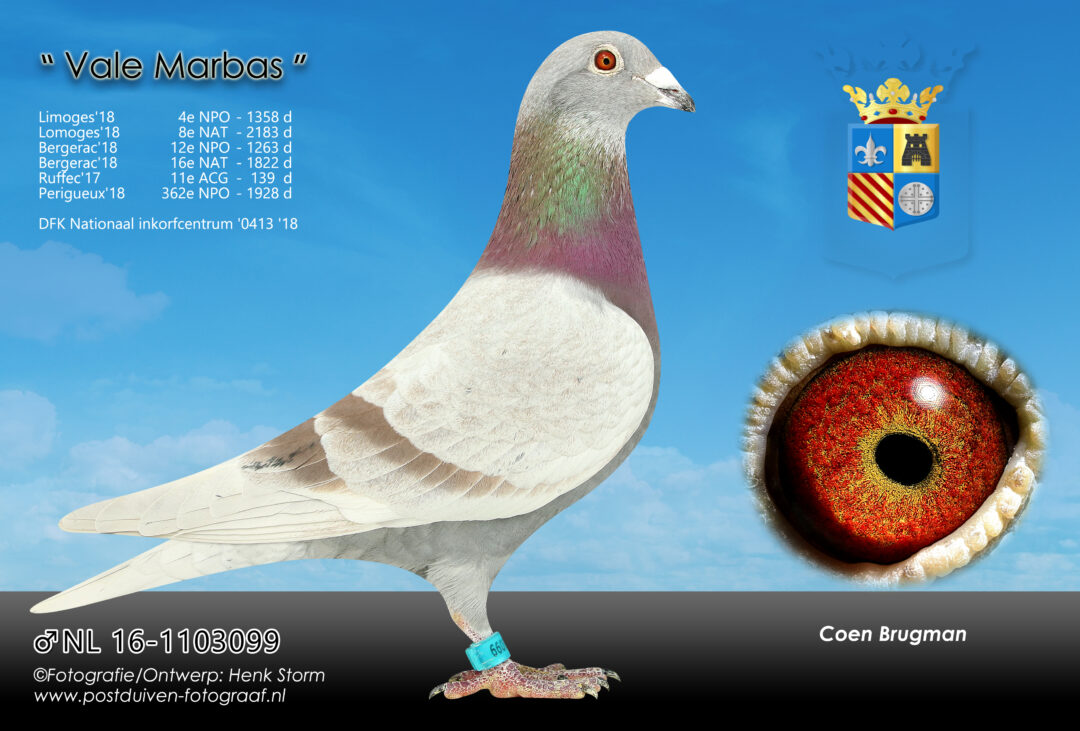 Coen Brugman selected 7 pigeons for his auction at Pigeoncom – only from his BEST pigeons !! Note: the sexe of the pigeons is considered correct by Coen Brugman, but is not 100% guaranteed. All pigeons in this auction are in the loft of Coen Brugman in Luttelgeest.

For more information (about this auction) please contact COEN BRUGMAN.