Almost all pigeons of Mart Derksen are based on the very exclusive pigeons Mart purchased from Jelle Jellema, Hugo Batenburg & Gerard Koopman. There is still a touch of the older strain of his grandfather Wim, which for the most part consists of pigeons with Gebr. Brugemann and Herman Brinkman blood, but the recent successes are primarily caused by the input of the Jelle Jellema x Hugo Batenburg x Gerard Koopman (Peiren) pigeons – from the best lines ofcourse!

Mart is a very ambitious young man who invests much in the best pigeons from the 3 icons mentioned above, which means that this auction is a unique chance !

Until recently Mart and his grandfather Wim Derksen raced together from one loft and are toppers at the marathon for many years in section 9 of the NPO, the VNCC, the Marathon Noord and the Fondunie 2000. And who has never heard of the combination Derksen (Mart’s father) – van de Keuken, the very succesful loft at the one day long distance NPO flights?

But Mart Derksen likes the extreme marathon flights most and has the best of the best pigeons available to follow his dreams. In 2018 Wim & Mart Derksen became 2nd champion in the very prestigious Marathon Noord (on the ZLU flights). In this semi national competition, the flights Barcelona, Marseille and Perpignan count for the points. After that great achievement, Mart decided to continue on his own and since 2019 is he racing with his pigeons from his own backyard. 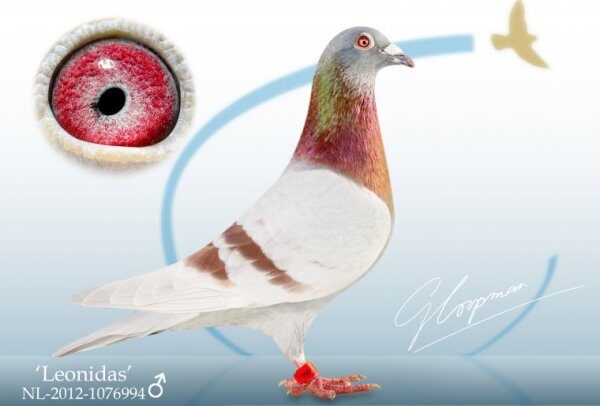 The birds which are offered by Mart Derksen are without any doubt super in the hand and in top condition. They are from his very exclusive breeding couples from Jelle Jellema (ROMEE, SILVIE, KLEINE JADE) & Hugo Batenburg (Mart has a son of THE SPECIAL ONE and a son of NEW LAUREAAT – 2 phenomenal pigeons who won international Barcelona !! And Mart has a son of LEONIDAS from Gerard Koopman (son LEONIDAS – 1st National Ace on the marathon and a direct son of the super breeder RED BULLENS).

Mart Derksen selected 7 FANTASTIC pigeons for his auction at Pigeoncom – only from his EXCLUSIVE BREEDERS !! Note: the sex of the pigeons is considered correct by Mart, but is not 100% guaranteed.

For more information (about this auction) please contact MART DERKSEN.