The man with the golden bloodlines for real long-distance races! All based on the Jan Arden pigeons! It all started with the good pigeons. Twan was born a long distance fancier. He started with the pigeons from v. Wanroy, and Jan Arden pigeons out of “131” and “DOLLE” (van Geel). They were the base of his colony. To make the family even stronger, Twan was always looking for better pigeons. He visited fanciers which were at the top of their fame with superior results at a speed not higher than 1000 m/m. He preferred the long distance races with extreme heat and head-wind. He never showed any interest in “night-flyers” but he preferred those that raced the long distances, on which they dominated with several pigeons at the top of the result.

Looking for the best let him to Cor De Heide in Made. His family is also based on Jan Arden pigeons, and here Twan bought 30 pigeons out of the best. The “KLAMPER” lines came to the breeding loft of Twan, with big success! One of them was “SUPERKLAMPER” (grandchild of “KLAMPER”). He turned out to be a super breeder. 20 of his children raced in top 150 on the national races. Unique results from 1 pigeon!!
Later Twan also went to Jelle Jellema to buy pigeons. He bought from the absolute best, and these pigeons have been a great success crossed with his own Aarden family! 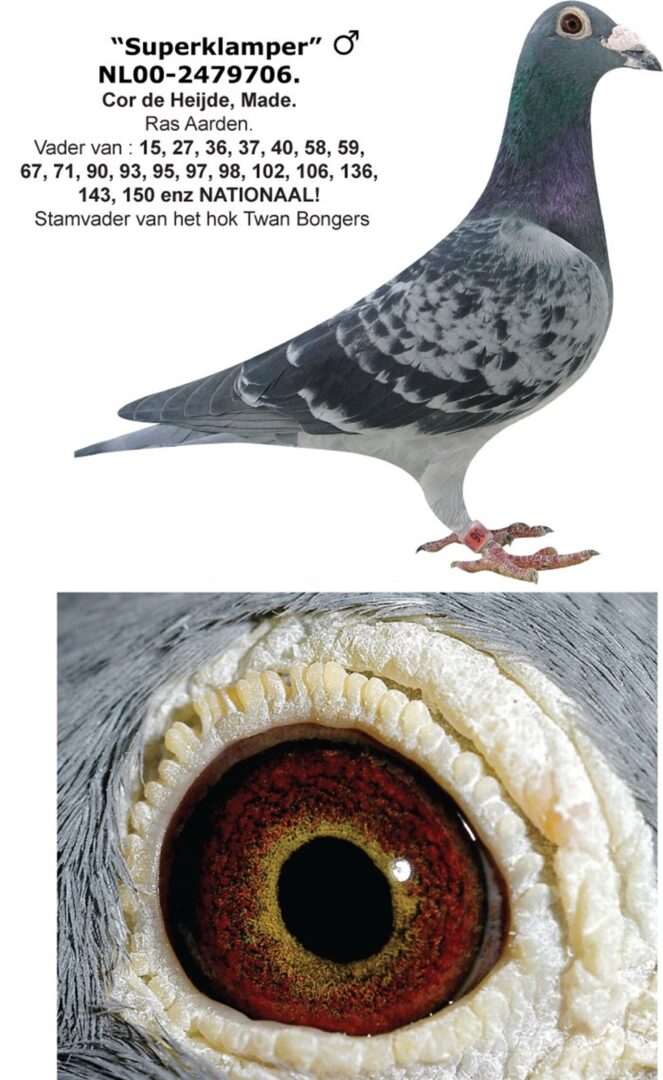 If there is one thing you can say about Twan Bongers it is that he doesn’t take half measures when he sets his mind to a goal. In his pigeon sport career this means: getting the very best long distance birds available. It is a goal Twan set for himself in the year 2000 and it is clear he has reached that goal. In fact, he reached that goal already way before today: as early as 2005 he already won the 1st International Perpignan against 22,319 pigeons over a distance of almost 1,016 kilometers with his “KIMLYNN”, named after his two daughters. That 1st International was of course also good for a 1st International hens against 4,859 pigeons and a 1st National against 6,300 pigeons, but it was not the only top performance of this fantastic pigeon. Earlier on she had already scored a 18th International Dax against 11,898 pigeons as well (6th National against 3,105 pigeons). In those days his loft was still considered to be developing, and rightly so, but nevertheless Twan managed to score among others a 36th St Vincent against 5,338 pigeons, a 16th Barcelona from 1,005 pigeons, a 21st Bergerac against 5,071 pigeons, a 13th Marseille against 3,840 pigeons and a 48th Dax against 3,516 pigeons in his Long Distance Club Zuiderkempen (NPO Sector 3). Unfortunately, faced with the dreaded “pigeon fancier’s lung” Twan’s racing career came to an end in 2011 on doctor’s orders. Unwilling to give up pigeon racing however, Twan then entered into partnership with various fanciers, restricting his role to only breeding at his lofts in Odiliapeel. His cooperation with Dutch fanciers such as Frans Belleter of Nispen, Sjef Geurts of Klimmen and Tiny van Creij, German fancier Uwe Späth and UK fancier Tom Scott continued to yield top long distance results, as did the descendants of his birds on many other lofts.

… have since then firmly established Twan Bongers’ name as one of the foremost marathon bird breeders of this generation.

In the above series we’ve not even mentioned the number of Provincial victories, top scores in International One Loft Races, acepigeons and super club performances Twan’s pigeons have scored. Suffice to say that if people like Patrick Philippens and Joost de Smeyter-Restiaan of Belgium, Mark Gilbert of the UK and M & C Hansen of Denmark, to name but a few, have found the way to the lofts of Odiliapeel, you can be sure there is some super quality to be found there.

Note: the sexe of the pigeons is considered correct by Twan, but is not 100% guaranteed. For more information concerning the pigeons in this auction, please contact TWAN BONGERS: